Flag Day: Long May She Wave

Before the Parade Passes By

Last Saturday morning my friend Rina (here from India via Vancouver, from three weeks ago through just now* [*post written over the course of two weeks -ed.], she was just collected by a car to go to Kennedy Airport) took off to far flung parts of Queens to see her auntie, and I had to get up to the post office to pick up a waiting package from my Vermont friend, Rebecca. Here’s what I wrote to her (slightly enhanced coverage): I headed up to the Sunnyside P.O. to pick up your VT package, wandering through the Flag Day Parade, all sorts of Sunnyside denizens waving little flags from their sidewalk posts, all these people with kids, women in shorts, or hijabs, or saris, or jeans and tee shirts, old and young; old guard Japanese men in uniform; local drum corps; kilted pipers; school children singing “It’s a small world…” (and bringing up the rear, waving aback of signage: wrinkled, white GOP men--all six)...and home again through more of same to open it.

So Sunday was Rina’s last day in New York, and after our usual long kitchen talk of the morning, she did laundry and I began notes for the blog. It occurred to me that someone needs to film Rina and me in conversation. We are fascinating. If I could record all that we say, I would.  I’ll try to grab onto certain themes, the main one being Nationalism: Really? In 2012? Still with the flags?

This is not a swipe at her country nor of the exciting diversity shown in the people who celebrate it: Miss O’ clearly loves her some diversity, because she chose to live in Sunnyside, Queens, where block for block, more languages are spoken than in any one place anywhere else in the world. On any given night getting off the train, I will not be able to identify (even ball park) three or four languages.

And I love the joy of costume, love saris and dhotis—such an elegant alternative to the ubiquitous American-export uniform of jeans and tee shirts. I think the hijab is nice, but I personally draw the “appreciation” line at burkas and the abaya/niqab combination (see all these and more by Googling “Islamic Boutique”)—those scarves that cover all but a woman's eyes. (The niqab is, frankly, creepy. And the one and only time I saw a burka in my neighborhood I more or less freaked out on the inside—mostly because I knew that if that woman didn’t wear it, someone might slit her throat and feel justified for an “honor” killing. This is not a prejudice based on stereotype—it’s based on real reportage.) (You know what else is creepy? Independent contractors who rent “Tickle Me Elmo” costumes and pose with tourists in Times Square. Who the hell is IN that suit?) (Miss O’ has chanced upon some of these costumed guys in their off moments, congregating and smoking—it’s surreal. Tough way to make a buck. And did I mention creepy? Because it’s creepy.)


My point is, I reflect on all this, all the time. And so does my friend Rina.

The idea began formulating as we watched the full version of the film The Fountainhead on YouTube, starring Gary Cooper, Patricia Neal, and Raymond Massey, the two of us stunned by the stilted, lousy dialogue and lack of emotional involvement we felt. When Rina asked me for the dozenth time, "Why did he do that?" or "What did Ayn Rand mean?" and I had to say, "I am watching the same movie you are," and Rina laughed and said, "Lisa, I expect you to know everything!": It occurred to me that instead of Dinner with Andre, the 2012 update some 30 years later should be My Tea with Rina. (If you have not seen that 1981 masterpiece My Dinner with Andre, starring Wallace Shawn and Andre Gregory, here is the link: (http://www.imdb.com/title/tt0082783/   It’s about artistic blocks and mid-life crisis, what it means to create in a world full of troubles and chaos, trying to live day to day while keeping a relationship together, all discussed over a sumptuous dinner in a NY restaurant, filmed by Louis Malle.) This Lisa/Rina movie would have to be filmed over many mornings; the first time Rina stayed with me it was for four or five months, and by the end of this time I felt I’d spent a semester in graduate school in International Relations (she was here on a Fulbright Fellowship working in this field). This past visit of three weeks was calmer, but the conversations of a morning (and evening) were as animated and unceasing as ever. After a week of quiet, I have tried to gather up a sampler. You, the reader, will just need to take each dialogue section and, you know, put it to the third or fourth power, and then multiply it by ten, to get the full effect.

[NOTE: You might see a contradiction here, if you are a follower of the ol’ blog, in that, being a Liberal and lover of language, I have described these opportunities as “heaven,” and they are. For two days at a time, maybe. Or longer, when I am not having to go to a job every day—my graduate summers at Bread Loaf were intense like this, too, but my only chore was laundry for six whole weeks—but in the day to day of intense living these kinds of talks can be a lot. Hence my idea to film them, mostly because Rina's life force is fucking amazing, and no amount of attention to my writing can render that musical voice.]

On Leaders: An Excerpt to Give You the Idea

Scene: Rina in pink nightgown, seated in oak chair by sideboard/kitchen table; Lisa in jammies seated in green wooden rocker by the kitchen door. One lamp on, on the table. A pot of tea. Coffee pot. Lisa has coffee in a mug, Rina tea in an English china teacup. The irony of using the colonial oppressor's cup is not lost on Rina, but china started in Asia, hence the name, and Rina, being from India, is Asian, and Columbus, in sailing and landing in America, thought he'd found India, so really in sitting here and sipping, it’s full circle, isn’t it?

RINA: Lisa, what do you think of Martin Luther King? [Note: Rina offers no preface for these kinds of questions.]

LISA: I think really highly of him. He sacrificed so much. Why?

RINA: What do you think of the criticism of him, for example, for his infidelities, or that he did not support other movements because they were more militant, did not march when others asked him? [Note: Rina really does talk like a research paper sounds, only with a deep and musical Indian accent, so it sounds enchanting, if in an accusatory way.]

LISA: (who is now at the stove to cook breakfast) See, that kind of stuff drives me up the wall. The man was married, had four children, a career as a minister, and he didn’t have to do ANYTHING. And yet he did. And he kept doing it, putting his life on the line every time. What goddamned more does everybody want from him? Why do we demand perfection from our leaders? Is assassination not enough? It is be-YOND.

[This is how it would go; you see that Rina would provide the deeply insightful questions and the class needed to counterbalance Lisa’s ranting and swearing.]

Subway to West Side Walk: In Brief

We began our last-say-in-New York journey heading to Central Park (Rina had not had a chance for this constitutional since her arrival) on the N Train, where the talk was of Rina’s Anglo-Indian school days, what it means to express one's loyalty.

We got to talking first about Flag Day—flag day traditions, nationalism, the meaning of that, is it old?; thence to the vitality provided by diversity; thence to the importance of religious freedom, if only someone didn't have to fucking convert a body all the time—again I brought up the idea of someone taping us talking—she mentioned meeting an author of a book, Adam’s Republic, whom she confronted: “'Why not Eve?' I asked him,” Rina said—and I remarked, “I mean, forget who's to blame, why is the tree there?"—and both of us perplexed about people who believe not in the metaphor of the Garden but in the story of the Fall as journalism, thereby missing the entire point of Genesis—and this somehow gets Rina into another conversation—schooldays at an Anglo-Indian school on Founder’s Day, how all the kids would be fainting in the heat after they sang “Happy Birthday” to the school founder, and then the anthem, and “all the while it's 35 degrees centigrade!”…the prefects catching the students as they fell over, taking them off the field, while the adults rested under the tent, blown on by fans, to listen to the president’s speech. The school anthem included the line: “We strive for serenity,” which Rina heard as “Sir Renity,” causing her to wonder, “Why are we striving for the colonial enslaver?” and so she’d refused to sing those particular words…for years… (I told her how a lot of kids in the U.S. hear that line in the Pledge of Allegiance, or Pledgeuvaleegince, as “…and to the Republic, for Richard stands, one nation, …”) And so the trek into the city passed, delightful despite the fact that Central Park was closed by the march of Puerto Rican Flags up Fifth Avenue. Another parade!

Off to the West Side (always a Plan B), to the American Museum of Natural History (or Mvsevm of Natvral History, if you’ve seen the engraved name on 79th St), where we wandered through dinosaurs and the Human Origin wing and the dioramas of taxidermy made majestic, talking on of the miracle of our being here at all.

From here we ambled to the Columbus Avenue Flea Market, then to Big Nick’s for Italian food (vegetarian), and finally to Lincoln Center so I could show Rina the glory that is the Henry Moore sculpture outside of Julliard. Here we found a craft fair in full force, and at first I was annoyed because tents surrounded my reclining bronze in the reflecting pool, but the art was pretty rockin'. We especially enjoyed these guys:
http://greenopolis.com/goblog/joe-laur/old-dolls-salvaged-metal-old-containers-art Bill and Marcia Finks, artists.

And the fountain in the front of the Metropolitan Opera House is the last stop on this tour…which fountain reminded Rina of the fountains in Las Vegas, and I told her, “They are designed by the same guy.” How do I know that? Where did I learn it? NPR? And I have to marvel: Isn’t it odd the stuff two people happen to know and care about and remark on, people who were raised and live worlds apart, and yet manage to intersect here in New York City, unable to stop talking, to stop sharing, to cease to live like mad?

Wouldn’t someone like to see that movie? I know I would. 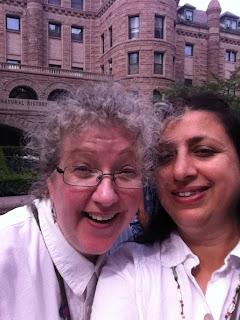 Miss O' and Rina, a Selves Portrait on iPhone NYC
Posted by Miss O' at 5:06 PM