DESIGN FOR LIVING: The Fabric of My Being 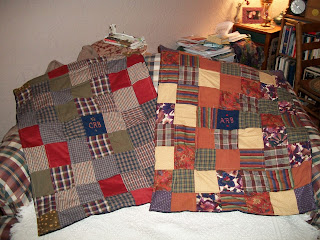 B. Costumes must suit the play’s subject, style, and time period.
SOME BACKGROUND: Costume design really began, as with set design, with the idea of “historical accuracy.” In Shakespeare’s time, for example, Julius Caesar was not performed in togas, but in the everyday clothes . . . of Shakespeare’s time. This is because there was no Google, let alone museums, TV, or photos of clothes of ancient Rome. Today, we generally expect characters’ clothes to fit the time period in which the play is set, either by playwright or director. When I say, “by the director,” I mean something more conceptual. Romeo and Juliet, for example, has been set in any number of locations, both modern and not, and some concepts work better than others. That said . . .
1. A play that is era-specific, such as Mister Roberts, a play about World War II that takes place on a cargo ship in the Pacific, needs clothes from that period, real uniforms, etc., and was not meant to be set, say, in Shakespeare’s time on an Elizabethan ship docked at Dover.
2. Many of Shakespeare’s plays, by contrast, I have seen performed in clothing styles from Shakespeare’s own time as well as clothes inspired by a painting by Watteau, and even given a Nazi theme, as in Ian McKellen’s famous portrayal of King Richard III, because Shakespeare is just timeless like that.
3. The point is that the chosen costume style should be specific and consistent in a way that enhances and does not detract from the play. (The jury may be out on the effectiveness of the Nazi theme, for example, though it was certainly memorable.)
C. The designer must coordinate the costumes not only with the play but with the other characters on stage. The audience needs cues to recognize relationships.
1. Families can be defined by color. In Zefferelli’s Romeo and Juliet, the Capulets were in red and gold, or variations on that; the Montagues, by contrast were in blue hues. This is a helpful visual identification for the audience, particularly at the ball and in the fight sequences. 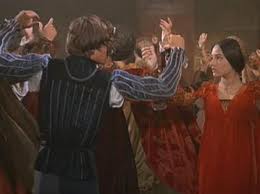 2. To give the audience a visual cue to spot “couples,” for example, one approach is to use color, as well. This helps audiences know who will be “getting together,” and is especially helpful in large-cast musicals. (In the Luxe High production of Hello, Dolly!, which incorporated those jewel tones: redux: Mrs. Malloy wore deep blue, so Cornelius, her future love, wore a deep blue bow tie, with a blue handkerchief in his breast pocket. Minnie wore emerald green, so future boyfriend Barnaby sported an emerald green tie and hanky. These are helpful cues, especially in shows where all the ingenues kind of run together.) In Zefferelli's Romeo and Juliet, while Juliet is in red and Romeo is in blue, when they marry in the chapel scene, they are in . . . purple. Their union is signified by their colors also joining. Did you notice that? Take a look—it’s really cool. 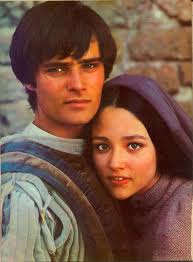 D. The audience really should not notice the clothes after the initial entrance.


1. My point is that a good design becomes part of the show, blends in to make the parts into a whole. A friend tells a story of seeing, in a high school production of Our Town, a canary yellow dress during the funeral scene: “How can you watch the graveyard and listen to the commentary when you keep getting distracted by every move of that yellow dress?” A chorus member in Hello, Dolly! wearing a really extraordinary dress and hat that takes focus away from Dolly herself is an example of bad design, no matter how lovely the outfit. (But try explaining that to the chorus girl’s mother.)


2. I will give you an example of how to do a “stand-out” costume the right way: In Stratford-on-Avon, I saw a glorious production of The Rivals, a Restoration comedy set in the 18th century colonial period in England. The comic character of Bob, the country squire, decides he is going to dress up to impress a woman. The designer, who had appropriately dressed Bob as a rough farmer in peasant clothes at the play’s opening, gave him this stunning transformation: Bob entered wearing pale pink satin breeches with orange bows placed at his knees and up and down the front of his matching tunic; upon his head was an enormously high brown pompadour wig, with a tiny pink tri-corn hat perched just at the top, a bit to the left. No one in the audience could stop laughing. It was just a wonderful entrance. The costume in no way detracted, because this transformation is important to the plot, the show was a comedy and splendid all around, and the acting lived up to the design. (The set design, too, included miniature Georgian houses as a background, so the notion of the miniature really was a design conceit throughout.) And the tiny tri-corn—just too wonderful and inspired—was never worn again, so in Bob’s subsequent scenes his new costume “disappeared,” as it should.
E. The costumes must coordinate with the set and lights. And vice versa x 2.
Above, I offered an example using The Rivals of how the set and costumes mirrored each other. Now I have two catastrophic examples:
I.  Example the First
Let’s take a big (and fictitious) example for fun, which is based on actual events, I kid you not (different play and different palette, same results) (I'd actually kind of like to write this play now):
SHOW: Day and Night!! A Comedy in Two Acts
PRODUCTION CONCEPT: Black and White!
ACT I: Early morning and breakfast hours in the living room and bedrooms areas of an artist’s loft; the artist and several family visitors and friends present
SCENE: Preparations and discussion of a huge ritzy party they are all to attend that night.
·      SET 1: “Black”: Walls, floor, furniture, screens, accessories are all in black.
·      COSTUMES 1: “White”: Bathrobes and slippers, dressing gowns, tee shirts, socks, etc. are all in white.
ACT II: Late evening at the well-appointed mansion penthouse of a wacky art collector.
SCENE: The artist and friends arrive at the party to meet the collector and his investors, and hijinks ensue!
·      SET 2: “White”: The walls, floor, furniture, accessories, table cloths, are all in white.
·      COSTUMES 2: “Black”: Tuxedos, evening gowns, shoes, accessories, are all in black.
Tout Simple!
Then one day, about a week after that first big production meeting, the set designer calls and says, “Hey, Mr. Director, the play is called Day and Night right? Shouldn’t the Act One set be white, like the day, and the Act Two set be black, like the night?”
And Mr. Director says, “Why Mr. Set Man, you have a point! Go for it!”
[NOTE: Reread the above concepts for sets and costumes. Now flop the sets. Read it again. Get the picture? That's right.]
Six weeks later the set is up and the costumes arrive. And the lights are going up. And everyone realizes, to their horror, that ONLY SET MAN knows about the concept change.
Hijinks ensue? More like fireworks, teeth gnashes, and diva wails. Act I is now a white out, and Act 2 has become a study in black holes. While the lighting designer can adjust light levels and move gels, there is no way to just “change out” the costumes. A bathrobe does not an evening gown make. A tee shirt is not a tux. The set issue is the same: a poor artist’s loft is not a swanky penthouse apartment.
This mix-up is not as much of an aberration as you might think. I’ve heard stories from professional designers who have worked with directors—who actually get paid and make a living, even—who have no idea how to communicate, thereby in fact causing problems this costly and catastrophic. These “directors” nod and agree to everything, and then at the first technical rehearsal, have strokes. And cause them.
[Aside 1]
I once was an assistant to a director in New York (an unpaid company, all of us) who hated the costumes for his show so much, he decided to change the concept the night before opening and announced his intention by sharing his disgust with the cast and crew. “Lisa, what do you think?” he asked rhetorically. I told him he was wrong to do this, and he blew up at me. “United we stand, divided we fall!” he cried.
“But you cannot put the onus on the actors to come up with new costumes,” I said. “You cannot throw out the work of months by the costume staff. No one is being paid for this. You approved the designs, you saw them in various stages of building. Now is not the time!”
The costumes stayed. Needless to say, this is the LAST show I’d do with him. C’est la vie.
[Aside 2]
The point here, too, is for teachers. I’ve had classes blow up at me because I never told them about something—a story to read, or an assignment. It happens. A fire drill can drive it out of my mind; maybe there was a snow day and one class missed it and I forgot. When you blow it, APOLOGIZE. PROFUSELY, AS NEEDED. Adjust your schedule, add time, regroup. Be aware, do your best, and with every major decision, ask yourself, in big loud letters, “WHO ELSE NEEDS TO KNOW THIS?” And then TELL THEM. Why is this HARD?
III. EXAMPLE THE SECOND (and closer to my heart)