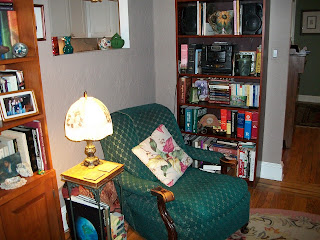 It's an unseasonably warm winter's evening in January in New York, the newly minted year of 2012. This is where I'm sitting as I type this. This chair was given to me by my college friend Gail Evans, who had been my roommate Vicki's previous roommate and who had left some thrift store furniture in the apartment when she'd graduated, and on a visit back to Blacksburg, I'd asked her if she ever wanted it back. "Oh, that green chair. It's from the 1930s. I love that chair." She paused and reflected in that way she had, seeing a point beyond and yet also purely in the moment.  She said, "No. If you don't want it, you can take it back to my mom's thrift store." I wanted it. I've been sitting in it ever since. From that apartment in B'burg to the Place to Montgomery St. to Church St. above Edna's beauty shop to the Stokeses' farm to my parents' shed to Spriggs Road to storage and to Queens: this chair is my home.