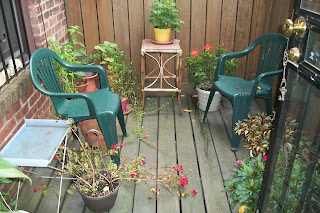 §  Heading Out in Summer: So I’m walking to work and I see Antoinette up in the upstairs right window through the screen. She waves, fans herself with tongue hanging out, then points to me, mouths “how are you” and “be careful” and then jumps as if remembering something and points to a card in her center window (where she puts all the cards that come to her, facing the street), a pink card with…is it a couple? And she gestures to up the street and then puts a hand on her heart, and I exclaim a mouthed “Oh!” and touch my own heart: So the Asian grandma with the amazing vegetable garden, four doors down, and the widower with crazy tchotchkes on his patio, two doors from Antoinette and Tony, have, after years of stepping out, finally gotten married. But you knew what she meant.

[According to Spellcheck, I spelled “tchotchkes” right on the first try, so I must be a New Yorker, officially, like.]

§  Dining in Summer 1: Monday night my friend Quinn and I decide we need not a movie but a dinner out, preferably in a garden (as it’s a real NY summer day, only around 83 degrees), and was there one in, say, Chelsea, the halfway point between our respective jobs? Voilà, I search and find Gascogne on 8th Avenue at 17th Street, with a $30 prix fixe on Mondays, three courses. We decide to splurge. At 6 PM we are the first to arrive, and are shown to the garden, which involves going through the long, narrow, wood-paneled bar, down a few steps, around a partition, and up a few steps into a lush green paradise surrounded by an ivied wood fence on one side and a peeling plastered brick wall on the other, with tall, artfully shuttered windows; beams above us are adorned with colored lights, the gardens in our midst contained in large pots and sculpted rock walls. The brick patio even extends to another level, up some steps. We sit in the back of the first level. The waiter places the napkins on our laps. Quinn and I are of the same mind when trying a new restaurant: get something you’ve never had, whenever possible. We began with chilled cucumber soup, which was heavenly, like a citrus, melon, liquid pillow on the tongue; Quinn ordered the duck. “How would you like it prepared?” Quinn owned this was a good question, and asked how he would like it prepared. “Medium rare,” the waiter said, and wrote it down. I ordered the lobster risotto in a white wine sauce. The food arrived looking splendid. My main course held half a lobster tail lying right on top.

I have to explain the irony of this: That very day, coincidentally, I had been telling my co-worker, Katrinka, about my one and only adventure with a real lobster, which I’d had in Old Orchard Beach, Maine, in 1989, when Terri Goodie’s uncle had bought the group of us lobsters for cooking at his beach house, $12 apiece, and how the horror of it on my plate—the huge insect glare of it—made me want to throw up. I apologized. “I can clean a chicken carcass with my teeth,” I explained, "so I don’t know why…” and Terri, who was thrilled, said, “That’s okay, I’ll eat it.” (In all the agony, I’d forgotten to pay for it, so Terri did. So embarrassing.) And THAT story reminded me of my Midwestern Grandma Kirlin visiting my mom when she was stationed in Newport, RI, in the 1950s, and her ordering lobster for dinner, and my mom trying to explain that it was the whole creature, not a casserole like you’d get in Omaha, and Grandma declaring, gamely, “I want to try it!” It came. She couldn’t touch it.

So there I was, you see, faced with a lobster tail. And...it was delicious, once I figured out, with Quinn’s help, what to do, and I was happy in realizing, too, that I’m not the same person I was at 25, after all; and Quinn’s duck was so perfect, it forever changed my mind about duck: Medium rare, people—the secret to food, so very often, as with so much else, is not to overcook it or overdo it. We finished with sorbet—mango and raspberry, and who could want more? The patio garden now full of diners, we drifted onto the avenue and walked toward Union Square, where a walk down 17th Street yielded memories for each of us of the spectacular light of a perfect summer evening—playing outside as kids and getting filthy; our friend Donnie’s first week in Brooklyn and the importance of “just walking around” for hours and hours when one first moves to New York, and ever after; window shopping at all the design stores, including Housing Works (“This is where I found that amazing octopus coat rack,” Quinn said, “the one we saw in the Brooklyn Museum last week.” Quinn had just liked it, could afford its oddly low price (amazingly), and carried it on the subway home. A man asked about it and the price. “You did very well,” the man had said. Boy howdy.) While we were paused at one window I saw a young woman descend from the back seat of an SUV, petite, fit, tanned, her firm body sheathed in a tasteful sleeveless beige linen top and a mini pencil skirt in a patterned neutral, high heels, blonde straight hair in a smooth ponytail. Her high, flat voice said through pastel pink lips, “See you inside,” and I turned to Quinn: “I have never wanted to be that," I said, pointing to her bouncing form. "Never. Why is that?” and Quinn said without missing a beat (like me he misses nothing on a city street and yet is totally engaged), “It’s not authentic.” I knew just what he meant. Summer insights. We walked on.

I see a cyclist and think about how I just could not bring myself to bicycle if it meant I’d have to wear a helmet. Quinn agrees. Riding a bike should be done not only bareheaded, but preferably barefooted, and in short shorts and a tank top (Quinn agrees), down the center of Alabama Avenue in twilight, on a purple banana saddle and with no hands. Why else would you ride a bike?

I pointed down the blocks to the New York Film Academy. “Do you know what that building actually is?” I asked Quinn, who knows his American history, having attended and absorbed William and Mary. “Tammany Hall,” of Boss Tweed infamy. And who told me? A former visiting student, Doug Lincoln. Go KNOW. And then a hello to the Andy Warhol Monument and into the N Train for me, and home to Queens against the western sky, creamsicle light with white puffs and smears of soft blue. Summer.

§  Living in Summer: I avoid turning on the air conditioner for as long as I can, and I turn it off at the first opportunity. I’d rather have real air, a fan, and sleep atop the sheets, even a little badly, than be contained in machine-cooled air. I’ve always felt this way, even since I was a kid. I’d beg my mom, gazing up at her through the Salem menthol haze of the dining room (more like a dining closet) in the morning, wanting to open the windows, and she’d say, “Oh, it’ll get too hot later,” and I knew she was not wrong. It was visiting a friend in Arlington one summer, a friend who couldn’t afford to run the air conditioner, that liberated me: I was allowed to choose not to turn it on. And I rarely do. I look up at Antoinette and Tony suffocating on their second floor, and I know it’s finances, for one, but also a need to grapple, I think, with the reality of the season, with summer in the city as summer is. And then we can be grateful for fall.

§  Dining in Summer 2: Sangria is a food group. And, often, supper.

§  Travel in Summer: No money for Paris, so I’m trying new places, new areas: Discovered the sweet stretch that is Vernon Blvd in Long Island City, and want to enjoy Dominie’s Hoek (a cool bar) and the other joints there before it becomes all young and hip in the total sense. There I learned about the “PBR” and (Bellow’s) whiskey special: Pabst Blue Ribbon is now HIP and is called PBR?  Uh, Pabst Blue Ribbon for five bucks? My face made the bartender sorry for me. And I felt just plain sorry. “I’ll have a Powers. Neat.”

§  Memory of Summer: Summer holds more memories for me than any other season, I think because it was spent almost entirely outdoors throughout my childhood. I loved getting filthy and then bathing at night and getting clean. Building forts. Running races on the sidewalk in bare feet. Dirt under fingernails. Dirt has integrity when you know how it got there, and because it will only end up there again, there’s no need to really clean it with anything like care.  Popsicle drool in sticky dry rivulets along sand-coated bare brown arms. Lawn sprinklers. Plastic trucks. Trees, trees, trees. Yards. The running across them. The doing cartwheels in them. The first sensation of evening dew.

§  Recreation in Summer: Sometimes, now, when it’s not walking sultry streets in lieu of dew-drenched grass, it’s summer at the movies, as it was on Tuesday in virtual Paris—Funny Face at Film Forum with friends (where Howard and I explain to Pat the history of the film and every person in it, because that’s what lifelong passion is all about), parting at Broadway for the various routes home, shouts along the darkening sidewalks down toward Prince Street—and gratitude for any breeze, moving air providing instant uplift of the heart. Lightness at being alive and a grown up and out in New York City at night in summer. A dream, as long as you don’t look, or smell, too closely.

§  Summer Vacation: As there is no possibility of escape, this is a summer where Miss O’ does not want to get bogged down in the odors of the city garbage, but rather engage in the romance of things green, wherever green can be found. And in sangria. And in reading Alison Bechdel's graphic-style memoirs Fun Home and Are You My Mother? The N Train to Coney Island is only $2.50 and I mean to take it.

§  In Sum: Sometimes you just gotta let summer be summer. By the pitcherful. 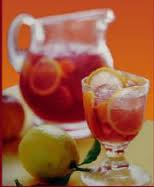 Google images has lots of sangria pictures.
Free. Avail yourself.
Posted by Miss O' at 10:06 AM