Land of the Free, Home of the Brave…and Outpost of the Stupid

The Devil Made Me Do It

Whenever she hears or reads some particularly stupid-ass statement framed to sound profound, Miss O’ cannot help but call to mind Old Capulet’s response to his fourteen-year-old daughter Juliet’s spin on why she will not marry Paris in that romantic tragedy, Shakespeare’s Romeo and Juliet: “How now, how now, chopped logic?” Juliet uses the kind of language adolescents often use to justify their incomprehensible or foolish actions, whether failing a test (“The teacher’s got a bad attitude”) or committing a date rape (“She asked for it.”). For example, in his teens, one of my brothers actually said to me by way of explaining how he broke a decorative object in our parents’ house, “Lisa, I didn’t break it. The alcohol did.”

It’s not only adolescents who use a linguistically gymnastical excuse to avoid personal responsibility for a reprehensible, or merely embarrassing, act (such as making up the word "gymnastical"):  We know people of all ages who drunk call old lovers while on a bender, explaining the next day: “I didn’t call you. The alcohol did.” And if such foolish acts stopped there, one might merely gaze wistfully into the middle distance and shake one’s head sadly, as Miss O’ is doing now (in remorse for all of last night’s drunk texting). But when a nationally televised pundit calls insurance-covered hospice and end-of-life doctor-patient discussions a “death panel,” a line of not only intelligence but decency has been crossed; that pundit fails the moral breathalyzer.

There is little that is more maddening to the educated and smart reader of Facebook than “inspirational” or “deep” posters that purport to offer quick wisdom for today’s on-the-go but caring social networker with an agenda. Whether it’s Jesus Loves You or God Hates Fags, or just a funny picture of a cat taking up the entire bed and proclaiming “It’s mine if I take it,” too much of this sort of offering is stupefying. And stupid-making. (And not to be an asshole, because I am FB friends with plenty of truly sweet people who really enjoy posting all kinds of posters like this, so I guess what I mean to say is I hope you know what they all mean. Ahem.) Here is an example of one poster in particular that set my brain anger to wildfire:

The layers of stupid are deceptive, so let’s break this one down in chart form.

In other words, there is no logic to this poster whatsoever, and yet, being a poster with a graphic design and big font (which poster image I refuse to reproduce here), people could easily nod and say, “That’s true.” As I’ve demonstrated, it’s not true.*

*[My drunken friend Scott slurs: A gun is a tool designed to kill and animal or a person the same was a fork is a tool designed to convey food. The gun does not shoot someone on its own nor does the fork feed someone on its own. The common denominator to tool usage is human intervention. The gun does not kill someone, a person wielding the gun does. A fork does not make someone fat, the person wielding the fork does. I would counter your counter of the flawed logic is flawed. Oh look, vodka! I don't disagree with him (it's a silly chart, silly goose), in that all the tools listed above were meant to be used by humans for specific purposes, but I stand by my point: Forks were not built to deliver obesity, nor pencils to deliberately misspell words, nor cars to deliver drunken drivers onto roads. Guns, however, were built for the sole purpose of killing: One does target practice in order to learn to kill more precisely (unless you take one former student's view, that guns were built to move projectiles, and that what happens after that is just bad luck, or God's will), whereas one really doesn't repeatedly lift a fork in order to get better at eating, perhaps accidentally toward obesity (which is way different from accidentally shooting someone to death). I suppose you could argue that one picks up a pencil in the hopes of...oh, fuck it. The poster's comparisons are not logical, in that a gun is for killing, however one may try to mitigate its use through comparisons to a fork, a pencil, and a car, is my point. Bombs away!] (P.S. Show me the National Utensil Association that strong-arms Congress into submission, and I may reconsider that analogy up there.)

Basically, the Bottom Line, When You Get Down to the Brass Tacks and Dig Down Deep, Where is the Bottom?

A guy, a “bestselling Conservative author” named "Jonah Goldberg," wrote a “hilarious” book called The Tyranny of Clichés: How Liberals Cheat in the War of Ideas.  (Here’s a link to his book: http://www.amazon.com/Tyranny-Cliches-Liberals-Cheat-Ideas/dp/1455164380 ) The excerpts I’ve read offer loads of bubbles for easy popping, not unlike the gun poster up there. (But he’s so funny!)

I’d like to go on record as saying that, in times like these, I’d rather fight fire with fire, and if that means using a cliché such as “we are only as free as the least free among us” rather than repeat a single word that comes out of John Boehner’s mouth or Ann Coulter’s ass, at least I know I’m free.

Clichés are verbal shorthand, and politics is full of them because politicians do a lot of campaigning, and short clichés are summary statements that are easy to remember and easier to hear. Clichés are often cheats for original thought, but they come from somewhere, these clichés, and they stick around because they are useful. They must have lasted for a reason.

The same is true for generalizations called stereotypes, though this is trickier territory. Stereotypes have to be separated from prejudices. A stereotype comes about because at a certain point in time, the generalizations posited by the stereotype were generally true, and may still be a bit true: Irish are drunks. Who can really o'argue with that? Jews are careful with money. Again, who can argue? Women like shopping for shoes and clothes. I mean, who does most of the world’s shopping, Carrie Bradshaw? Blacks like fried chicken. They do, and I saw trails of chicken bones strewn across my old Harlem neighborhood to prove it. Gays are great decorators who love the arts. Girlfriend, please.

As with every generalization, there are myriad exceptions to "prove the rule" of a stereotype. A prejudice, unlike a stereotype, is a belief born of ignorance and fear: The Irish are savages. Jews are inhuman. Women are incapable of voting. Blacks are incapable of thought. Gays cannot have loving relationships. Prejudices all, the statements you just read, because they have no basis in demonstrable reality. Stereotypes just kind of happen. Prejudices are consciously encouraged and used, often by opportunistic politicians, to oppress.

The subject of today's blog came up for me this week because of my friend Kevin, who puts on his Facebook wall posters from a site called “Occupy Fran” [note: Kevin Townley CREATED these posters as a month-long art installation! --ed.], featuring the wit and wisdom of the writer Fran Lebowitz. In this particular offering, part of a series, she discusses how easy it is for the children of movie stars, who are most often white people, to “get in the door” (a cliché!) and have successful careers, regardless of actual talent. 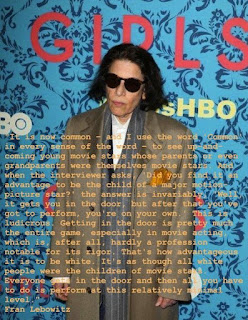 Here is a follow-up poster: 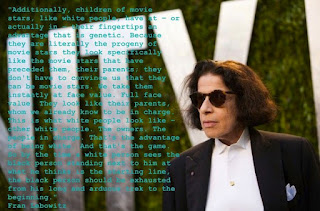 The Lebowitz statements—bold and challenging and funny and kind of mad-making—are the kinds of things I really like to read. They make me think, these posters, if not always completely agree with their contents. Her writing is not about pith that verbally slaps a face, nor made for rubbing someone’s nose in a political ideology. It’s argument by way of example and a life lived. Most important, though, the words have an OWNER who takes total responsibility for them. Eat it, Anonymous Generalizations Posters!

Say It, Maybe Spray It

So it seems to me that if I’m celebrating anything of America on the 4th of July, it’s TALKING. I celebrate the whole Freedom of Speech deal. As storyteller and NPR monument Garrison Keillor has pointed out, “The most un-American thing you can say in America is, ‘You can’t say that.’” You can. Say it. And be prepared to know that if it’s stupid, Miss O’ will take you down. And afterwards, take you for a drink. (And she knows you will extend the same take-down courtesy to her. Because you have. Scott.)


Let's join hands and close with a song from the joyous coming-of-adulthood American musical, Avenue Q, which you really, really must see. It's adorable!
http://www.youtube.com/watch?v=aHKIMOgoJoU

Love to you all, and let’s hear it—use those WORDS—for the United Ever-Lovin’ States of Goddamned America. 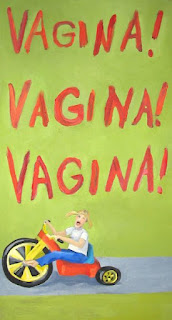