Fun Fact: Will Rogers's statue in the Capitol building is aged bronze, all except the toe of one shoe, rubbed to a shiny brassy gold over years, for good luck, by Dems as they head into the chamber to vote. I saw it myself.

There's a big election this year. Don't know if you've heard about it. It's too bad American media doesn't focus on why it matters, but insta-poll numbers and graphs are so patriotically colorful! Who wants to hear about facts?

Today's is a quick post on voting. Much as I love voting, and the entire experience of seeing how my vote turns into a voice and thus into an act for the future of an entire nation, there are citizens of this country who should not vote. I don't just mean the Republicans.

Whatever your political denomination (and possibly you don't even believe in politics; I respect that), if you are an American citizen and don't educate yourself and vote accordingly, all I can say is, "That's okay. I got your rights."

And I mean this: If you don't know what in the hell is going on out there, whatever you do, DON'T VOTE. Don't listen to anyone at the last minute, even Miss O' or Aunt Lucy or Uncle Bob or your brother Bill. If you haven't done your own legwork, for the love of Nation, do not vote.

That said: What in the hell is the MATTER with you? 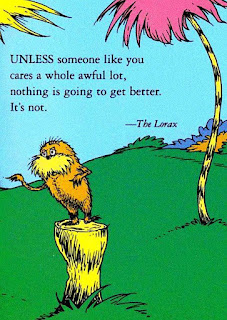 From "The Lorax" by Dr. Seuss

So that's all the guilt for today. I posted this last year, but it bears a repeat: Years ago, one of Miss O’s former students said, “Miss O’, I can tell you are a Liberal.”

“Are my ideals showing?” I asked.

This is just what one dreams of a student becoming: a rational question-asker, a genuinely curious person. I had never been asked, nor had I answered, such a question before. I love a challenge. What I am about to write is almost exactly what I said, and in 20 years my answer would remain more or less the same. But in order to answer her, I had to compare liberalism with conservatism, as I understood it through the prism of politics since Reagan. I came up with three tenants that are at the heart of liberal and conservative discord, speaking obviously as Citizen O’ and not Miss O’. (And may I suggest you do the same exercise for yourself?)

“1) A liberal believes in government legislation, or public policy, for the things we all share— air, water, infrastructure, legal protections, and the like—and leaving private morality—sexual activity, reproduction, religion—up to individual choice. A conservative believes the opposite: legislate private morality, and leave public policy up to individuals and corporate entities. 2) A liberal, understanding that people are never born onto a level playing field, is willing to lower her standard of living a little bit, via taxes, if it will help bring up the standard of living of the poorest among us. A conservative, by contrast, knows that all people are born onto a level playing field, and believes that each person must ‘pull himself up by his own bootstraps,’ regardless of whether he has boots, straps, or feet, without aid beyond individual charity. 3) While a conservative places religion, or ‘belief,’ at the center of his life and choices, a liberal places worldly education, or ‘knowledge supported by verifiable facts,’ at the center of his life and choices. Neither religious belief nor worldly education is mutually exclusive; it’s a matter of positioning. These three differences alone make me a liberal.”

But today, I am tired. As my readers know, Miss O' has read, researched, argued with all comers (and boy, howdy, whatever political gun-shyness they have on their own Facebook pages, they show none of it on mine!), struggled to think all the ideas through, and then read some goddamned more all over this campaign season's ass. I get exasperated with the political dance, lose my mind, gnash my teeth. If the stakes weren't so goddamned high, I'd say it's all a farce. (The best presidential candidate, Jill Stein, isn't even in the news, and the single most important issue, global warming (and the fresh water supply), hasn't even been on the 2012 political table.) I think of Clare Booth Luce, playwright turned politico and wife of the founder of Time magazine, when she said, "Politics is the refuge of second class minds." I worry that mine is little more than a second class mind, that I will never achieve the status of artist. And yet I must activate my activism, articulate my vision, and unleash it on the world. I wish I were cooler.

My friends Jodi Chamberlain:  http://www.jodichamberlain.com/ and Lisa DiPetto:  http://www.lisadipetto.com/ have created a new video of your dear Miss O' telling a story of her grandparents and voting, and why it matters.

Here's hoping you enjoy it (it's very short), and wishing this crazy democratic experiment of a country the best of outcomes. I am nauseous every single day. I'm taking at least a week off, beginning Tuesday, to regroup and replenish, because there is nothing more I can do. I've sent out every bit of brain matter I have and put all my heart into this thing, posted on Facebook ad nauseam, lost friends, influenced no one, but tried my best to fight the good fight for the people.

Get out and, if you know WHY, vote. And now, the feature film:
http://www.youtube.com/watch?v=NSBioi-_h9s&feature=g-all-u